Detail History of How Mute Swans Lost their Federal Protection

If you are Wondering WHY?? are the Mute Swans being Destroyed all over the United States.  You will not need to Look very Hard to find a Tremendous Amount of Information on the Internet.

It is HARD to Believe this is Really Happening.

Detail History of How Mute Swans
Lost their Federal Protection

SUMMARY OF THE MUTE SWAN’s
Removal from the MBTA
7/15/05 Source Arlene Steinberg
Information Attributed to Kathryn Burton
CAMPAIGN to STOP Swan KILLING !!!!
FROM a WebSite: SaveOurSwans.com
Which is no Longer Active.
Occasional I do Find this OnLine.

Do a Search for “Save Our Swans” or “Stop Killing Swans”
You will Find a Great Deal of Information..
about the Tragic Plight of the Mute Swans in the United States.

THERE are Active Attempts being made to STOP the Killing
of the Mute Swans. It is not happening Fast Enough.

This Video is Haunting..
TO SAVE A SWAN – Shirley Bolin Regal Swan Foundation
https://www.youtube.com/watch?v=1gk7473LJVo

DETAILED BACKGROUND (from 2005)  Save Our Swans
A Little History Since 1916, the U.S. has signed four international treaties – with Canada, Mexico, Russia, and Japan – to protect migratory birds which move between countries. Congress enacted the Migratory Bird Treaty Act (MBTA) in 1918, a major aspect of our conservation law, to implement and enforce the provisions of these international treaties. This bill gave federal protection to migratory birds that passed through the United States.

Nowhere in the four migratory bird treaties has there been any distinction between “native” and “non-native” species. To the contrary, these treaties are specifically intended to protect birds which move between countries.

The new “reform” legislation undermines the very purpose of the migratory bird treaties – to protect birds not just in “native” countries, but across the full range of their ancient migratory routes.

The MBTA, which has worked well for nine decades, already includes provisions for dealing with birds which may harm agriculture or the environment. But because federal and state wildlife officials couldn’t prove mute swans were causing any damage, pro-hunting politicians found a clever way around the MBTA: they rewrote the law.

Late last year (Dec 2004), the Migratory Bird Treaty Reform Act was quietly slipped into a 2005 omnibus spending package, buried in 3,600 pages of language. No one saw it. It received no public hearing, no public discussion, and no public debate. It was backroom political dealing at its worst, and a congressional committee passed it. The president (Geo Bush) signed it into law in December 2004. This secret rider, the Migratory Bird Treaty Reform Act, introduced by U.S. Representative Wayne Gilchrest (R-MD) and U.S. Senator George Voinovich (R-OH) removes federal protections for mute swans and dozens of other bird species. The criteria for removing protections will now be based on a bird’s ancestry, and any species declared to be “non-native” to the United States would no longer be safe.

From Beauty to Beast

The mute swan is a large, all-white bird, recognized by its orange bill with black at its base, common in Europe and Asia without any problems for thousands of years. The birds grace many lakes and bays in the United States, primarily on the east coast. Nobody knows exactly when or how the swans first came to America; however, S. Dillon Ripley, who headed the Smithsonian and the Birding Department at Yale University, has stated they have been here since Colonial days. Some people are working on proving that they may have migrated with other swan species from the Russia/Siberia coast across the Bering Straights, just as man did, and at the same time. There are 9500 year-old fossils of mute swans found in Oregon and older ones found in Arizona and Idaho. If this can be proved, it might help win back the birds’ federal protection.

Mute swans can still be found in Russia/Siberia/Kamchatka, a short swan flight from Alaska. The beautiful birds stand squarely in the center of controversy, as state and federal wildlife officials and some environmental organizations have been eager to blame mute swans for being aggressive, pushing out other waterfowl, and even destroying submerged aquatic vegetation (SAV) in sensitive areas such as the Chesapeake Bay.

They never mention that the SAVs had a worldwide die off in the 1930s, including our east coast, and the enormous pollution that flows into the very shallow Chesapeake Bay every single day from chicken and pig farms, paper companies and unstoppable development on the shorelines has played a major role in the reason why those grasses are only now returning. In the northeast, the grasses had returned by the 1970s everywhere but in Maryland, even though at the time the largest concentration of mute swans was in Long Island Sound, which had already recovered. (Maryland has a particular hunting agenda for the swans and is therefore the most vociferous about their destruction.)

The evidence against the swans is flimsy and completely unscientific. Swans can be aggressive during nesting season, but so are many other animals and birds – this is natural behavior. Wildlife agencies’ own studies indicate that the small population of mute swans – only 3,600 in Maryland and 14,000 in the entire Atlantic Flyway (17 Atlantic coastal states the birds fly through in their migration) of the United States and Canada – is not causing any real damage.

According to the Chesapeake Bay Foundation, the two leading threats to the bay’s crucial underwater grasses are agricultural waste run-off from industrial chicken processing plants (nitrogen) and sewage treatment plants. Mute swans probably wouldn’t make a list of the top fifty threats. But the big industrial chicken producers pull out all the lobbying stops to defeat any meaningful attempts to control agricultural waste. And no one wants to appropriate the money to upgrade sewage treatment capacity.

It’s much easier for public officials to scapegoat the swans than to grapple with complex environmental problems. Even in Maryland, where the controversy has been most heated, the state’s Department of Natural Resources (DNR) has repeatedly explained that mute swans have only a “negligible” impact on the Chesapeake Bay, that “there is no evidence to suggest that mute swans are causing any impact to agriculture in Maryland,” that the birds “are not the primary cause of the decline of SAV in the Chesapeake Bay,” and that, in fact, the “decline of SAV has been attributed primarily to elevated levels of nutrients and suspended sediments.” Point in fact: the Chesapeake Bay has never met the minimum requirements for the Clean Water Act.

In an ironic footnote to the mute swan saga, the federal and state partnership Chesapeake Bay Program recently released a report revealing the startling news that the upper bay’s underwater grasses have more than doubled from 2003 to 2004. Which if anything, proves that the swans have a beneficial impact and not a negative one. However, they are certainly not promoting this information, preferring to vilify the swans to accomplish their own ends.

Origin of the Species?
The “Reform Act” targets not only mute swans, but more than 100 bird species-including certain species of storks, pelicans, cardinals, cranes, and orioles-which, according to the new law are not “entirely the result of natural biological or ecological conditions.”

But who decides which species meet that arbitrary definition?
That responsibility rests solely with the U.S. Fish and Wildlife Service.

And how do those USFWS decision-makers deal with murky circumstances such as, say, a species that migrates from its native habitat because of environmental changes? Are those birds now considered non-native in their new habitat?

They have already admitted that the mute swans migrate through the Great Lakes area into the United States. Isn’t that the exact definition of what the new bill stated? Although the swans were the intended immediate target of the “Reform” act, other birds will suffer as well. Some of the species targeted to lose their protection are even considered imperiled under other international agreements such as the Convention on International Trade in Endangered Species of Wild Fauna and Flora (CITES).

Species such as the Nicobar pigeon and the Luzon bleeding-heart need global cooperation to survive. Bird species protected in other range states under their domestic laws could be killed when traveling through the United States, undermining diligent efforts abroad to protect these same species at other times of the year.

Sadly, so-called environmental organizations that should have been on the swan’ side helped the hunters undermine it. Environmental groups such as the American Bird Conservancy, National Audubon Society, Sierra Club, The Nature Conservancy, and World Wildlife Fund should have rallied to the birds’ defense, but they are little more today than thinly-veiled hunting groups themselves (The Audubon Society is having a huge internal battle over just this fundamental philosophical difference.). So they joined the NRA, Safari Club International, U.S. Sportsmen’s Alliance, and Archery Trade Association in the effort to allow the wholesale slaughter of mute swans.

This is disastrous environmental mismanagement, an outrageous political travesty, and abominable and needless potential destruction of one of the most beautiful animals on this planet, solely to fit the goals of a diminishing but well-financed hunting lobby and the federal and state agencies that rely on the sales of hunting licenses to exist. 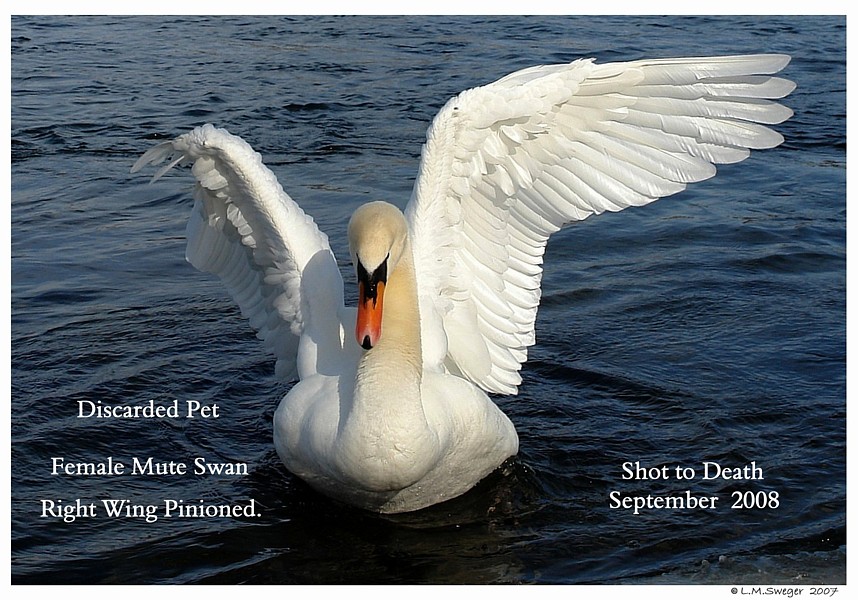